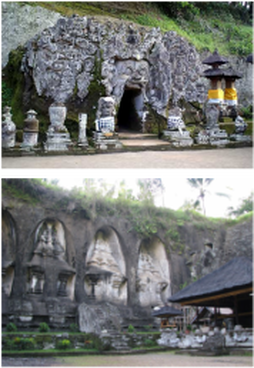 Further temples and monasteries were established over the next 400 hundred years or so, the ninth century cave temples at Goa Gajah, the famed Elephant Cave (just east and northeast of Ubud), are architectural remains from this period and many of the dances, drama and rituals still practiced in Ubud today, originated at this time. King Airlangga ruled all of Java and Bali in this era, and his seat of government was located in what is now the village of Batuan, just southeast of Ubud.

Another beautiful temple built around this time was Gunung Kawi, an 11th century temple complex in Tampaksiring north east of Ubud in Bali, Indonesia. It is located on the river Pakrisan. The complex comprises 10 rock-cut candi (shrines) carved into the cliff face. They stand in 7m-high (23 ft-high) sheltered niches cut into the sheer cliff face. These monuments are thought to be dedicated to King Anak Wungsu of the Udayana dynasty and his favourite queens.

The Javanese Majapahit kingdom conquered Bali in 1343, and the key final victory was against the Pejeng Dynasty centred at Bedulu, just to the east of Ubud. A great flowering of Balinese culture followed, and the ancestry of Ubud's current day aristocratic families can be traced back to this period. In the sixteenth Century, there was a total transplantation of the Majapahit Kingdom to Bali as the Islamisation of Java forced them eastwards. Power flip-flopped between various dynasties and feudal lords, but the Ubud area remained a very important cog in the various regencies which ruled the island.

It has been the stamping ground of Bali's earliest dynasties in recorded history. It is here that the first great lines of Hindu Zed Kings established themselves. Pejeng was the center of power until the early 14th century, when the last line of Warmadewa was defeated by Majapahit Empire, Under Gajah Mada, in 1343. The two rivers, Petanu and Pakrisan, have been storing series of ancient historical remains along the banks, such as temples, meditation cells, baths and other monuments. 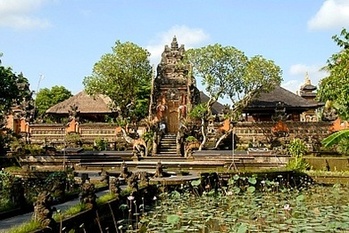 Pura Desa Ubud: The main "town temple" in the centre, across from Ary's Warung.

Pura Dalem Ubud: The temple for the dark side of things. On the north side of Jalan Raya before the road descends to Campuan.

Pura Pamerajan Sari C. Agung: The private family temple of the Ubud royal family. On the east side of Jalan Suweta, a little north of the Palace.

Pura Taman Saraswati: Part of the Puri Saraswati complex, devoted to Dewi Saraswati the goddess of learning, literature and the arts, Features a fine padmasana (lotus throne). Beyond the lotus pond in the back of Cafe Lotus.

Pura Dalem Agung Padangtegal: Another temple for the dark side, down by the monkey forest.

Pura Gunung Lebah: At the confluence of the east and west branches of the Wos River , below the Campuan bridge.

Pura Batur Sari: A royal temple devoted to the deity of Mt Batur, ostensibly to spare the Ubud Tjokordas the long journey up to the mountain itself. During its odalan, the dance stage is set up in front of the temple, right in the middle of Jalan Suweta, a few hundred metres north of Ubud's main cross-roads.
If you wish to contact us or make a booking please CLICK HERE
and we will get back to you as soon as humanly possible, thank you.